This project is another station in a two-year-long project conducted by Adventurous Architecture under the direction of Theo Dounas and Davide Lombardi. The initial spore of the project has been the publication of two peer-reviewed academic papers earlier on by the team on CAAD Futures conference in Istanbul (2017) and at the CAADRIA conference in Suzhou (2017). The competition was an excellent opportunity to test our algorithms into a real brief in China.

Research
Adventurous Architecture has pioneered a unique working condition of architecture, where experimentation with computing tools is the norm, and the expectation in the office. Computation for us is an enabler, a unique lens with which architecture is focused, optimised, explored, researched, built, and tested. For this competition, our team worked in online sharing files between Scotland and various parts of China. One of us visited the site and took extensive photographs when we started working on the competition. This helped us understand the very distinct natural landscape and the vernacular architecture professed. Our initial take was to write a brief that would re-translate and direct our effort, providing our interpretation of the competition brief.

The questions we had initially were:

Firstly, Could we create a new and futuristic language in architecture by using the vocabulary of the past, re-encased in a new grammar? Which are the (new) rules that create a city of the future (in China)?
Secondly, How would development of future cities accommodate a natural landscape, regional culture, and diverse characteristics, while ensuring economic and financial development in China?
At the same time, we reflected on the needs of the population, the development of China and the potential directions we could take. As such, we identified Big Data and Intelligent manufacturing & Entrepreneurship as features desirable for the government of the city to incorporate. In parallel we saw that Blockchain technologies and cryptocurrency generation are a feature that can be incorporated into the design of new cities, more so in China, a country that is leading the efforts in many cases of regulation and adaptation of this financial technology sector. We want to provide an uncompromising vision of the future using, defining and buttressing our design strategies with computation.

For the office, the competition was an opportunity to test new ideas, new generative systems. The paper we had published earlier over the summer on Speculative densities in Chinese cities- inspired by a case study at the Suzhou Industrial Park- has been used as starting point for building the strategy applied in the competition itself. That paper was using cellular automata for the configuration of housing tower block with increased density at the level of the city. Cellular Automata is a mathematical tool that can simulate well ordered biological processes of growth.

Hence our design process was a huge experiment or a series of experiments in testing algorithmic and generative ideas, from the large scale of the district to the smaller of the city. The discussions were held online, almost always early in the morning in Scotland and late afternoon in China to accommodate the 7-8 hour difference. The initial brainstorming led to the first sketch of an idea modeled on a classic whiteboard in Dr Lombardi’s office: 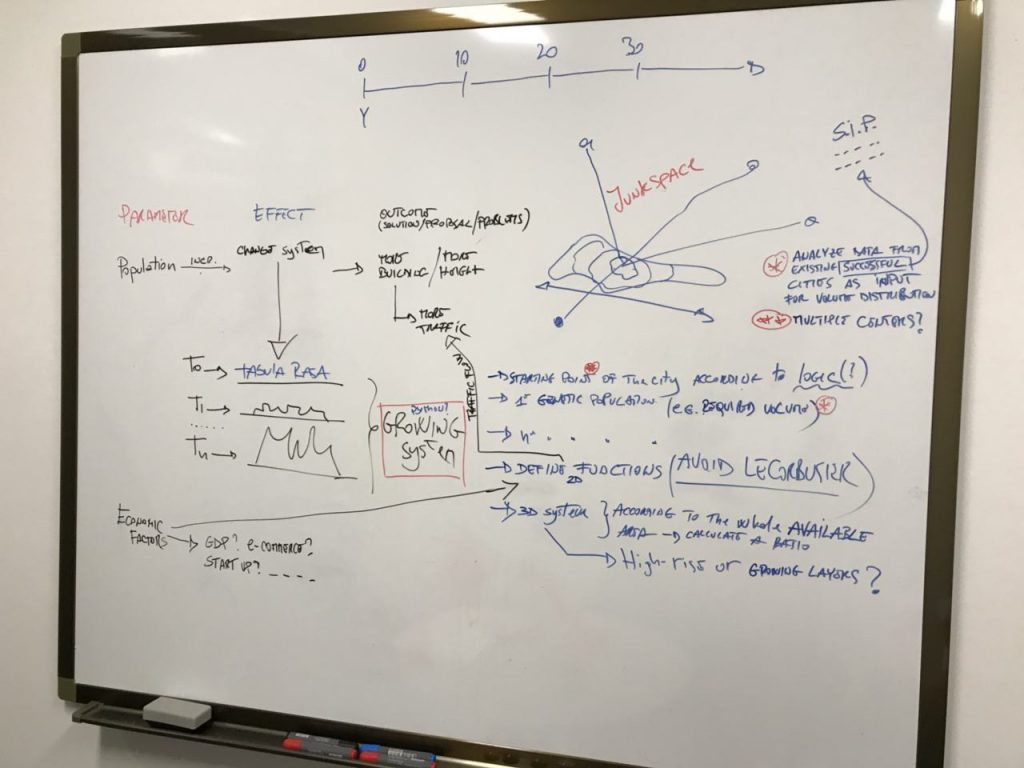 From this initial setup we proceeded to set out a macro scale strategy and then a lower tactical level of implementation. The lower level was based on previous exploratory works and it remained for us to implement and test the macro scale.

In this we started working with Agents and Agent-based systems, however, most of the experiments we tried did not work as intended. The environment we had set up did not have enough constraints for the agents to operate inefficiently. In most cases the agent systems would produce beautiful complexity but would not be able to be driven in specific directions, creating a chicken and egg problem every designer has: how do you deal with constraints? Do you first define them and then follow or do you set the direction first working around constraints afterward?

Further, the Agent-based logic is mostly based on the application of three simple rules: alignment, cohesion, and repulsion among the agents. Those rules immediately showed how weak and/or insufficient they are if applied in a very complex environment with high-level needs such as a large district. The complexity of the final picture was reflecting a fascinating geometry with no value from the point of view of the urban planning and in which was almost impossible to implement additional constraints or opportunities as the one given by Big Data. The second strategy we tried at the macro scale was to set up a system of attractors, detractors and particle generations where the particles would attempt to cluster and create new parts of the city. Unfortunately, this attempt did not produce the variation and the result we needed, as it produced patterns and clusters of forms out of scale. [Figure 3.] 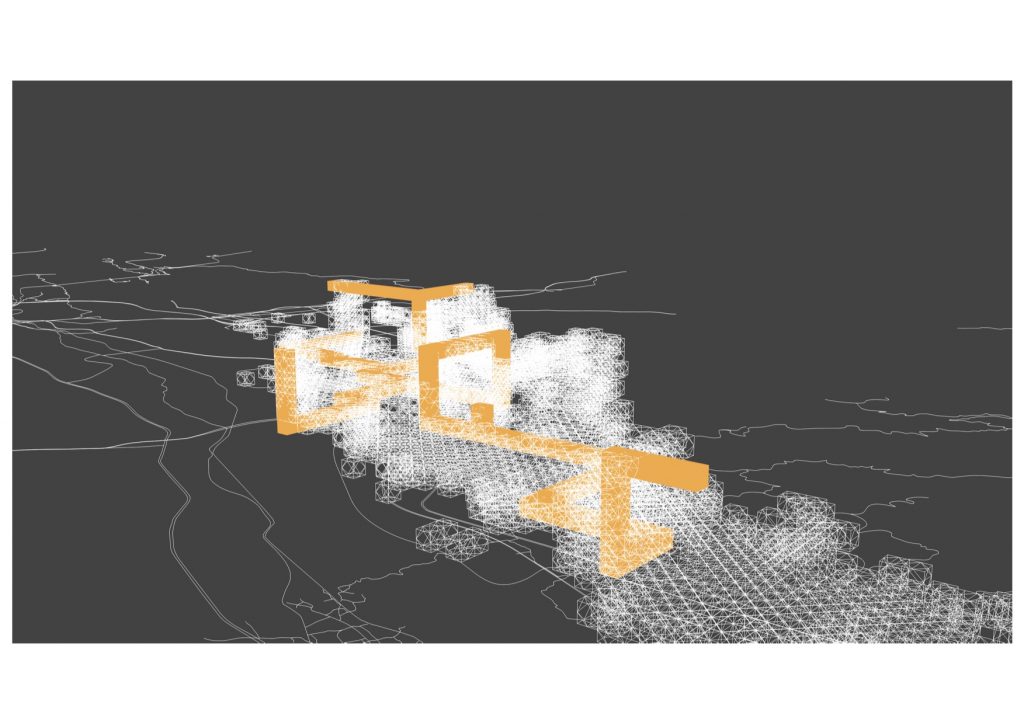 Figure 3: Agents and Particles in Blender out of control.

Design result and the project

In the end, we re-worked our initial algorithm:

‘We realized that our algorithm could be adapted from the size of a building block to the size of a whole city with input from statistical analysis of the wider region of the city of Yilong, reverting to the original idea of using cellular automata as the main mechanism for growth in the city’ T.Dounas 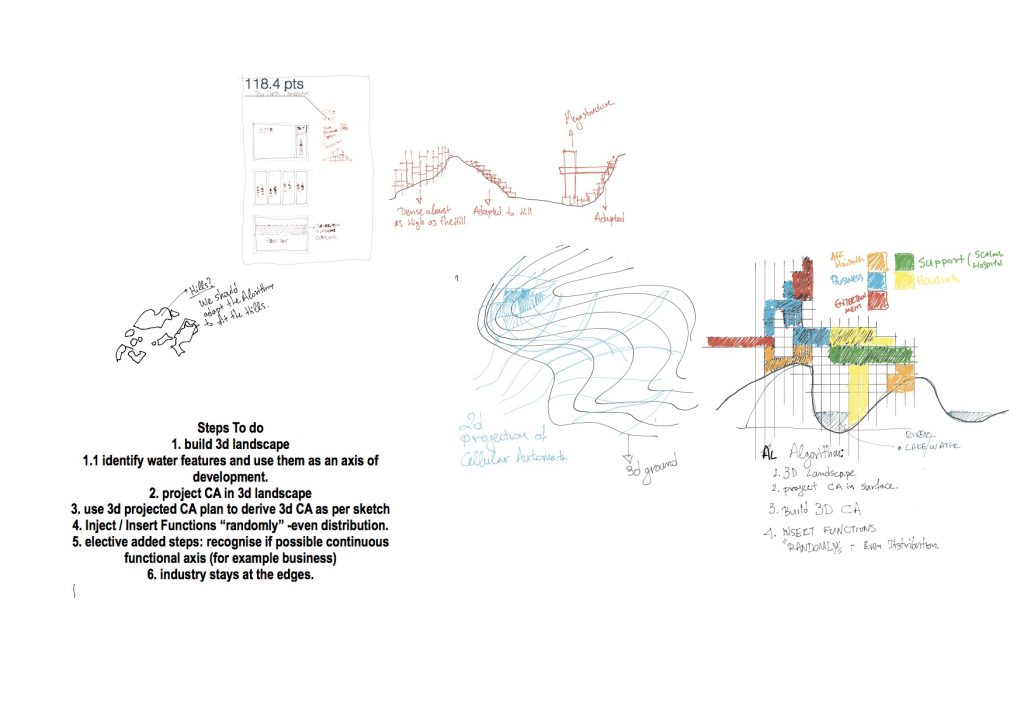 On its most basic level our strategy can be minimised into this sketch in figure 5: 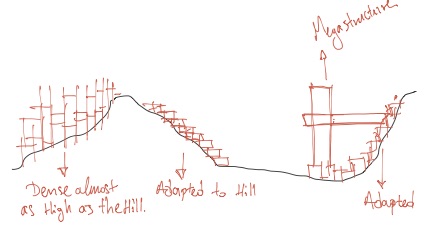 To define the parameters which complement the Cellular Automata, the final description of the project speaks for its self- 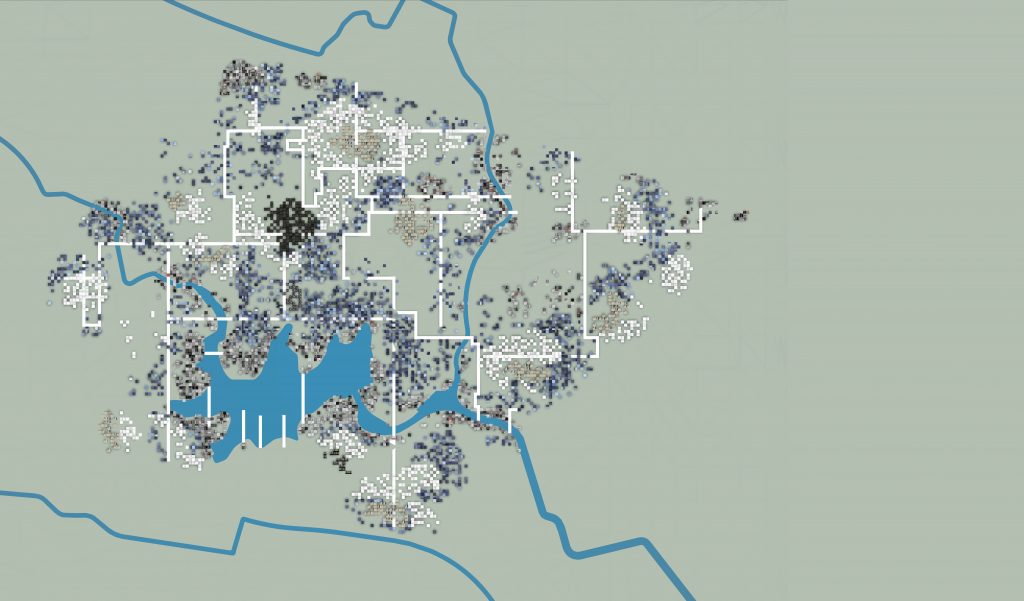 Figure 6: Plan of one of the produced ‘cities’ –This is the one we selected to submit to the competition.

Architecture in China lies at the moment beyond the Avant Garde. Concurrently, China is still developing its urban condition as a project of prosperity. Within this unique condition, there lie three unique advantages: China is leading the world in terms of Big Data (through the government programmes, Alibaba and Tencent), leading in financial technology in everyday life, again through Alibaba and Alipay and WeChat and Wechat portfolio- finally China is leading the world in mass production of digital currencies such as BitCoin and Ethereum in dedicated urban farms in the west part of China.

Our proposal builds on these traits of Chinese development, but also within the unique Chinese characteristics of Chinese urban space: density, unproductiveness sprang out of a top down approach in planning, the combination of a traditional architecture, with small-scale, meaning-generating material with the clean, cold, modern expression of towers and density.

To express this, we have devised a design algorithm that can work in the convergence between Big Data and top-down urbanism. Within our project, we take into account the data we have for the area of Yilong, from the Chinese statistics authority, in combination with the main waterways, connection to the adjacent airport. the algorithm tries to build an urban density based on the cellular automata paradigm, influenced by the functions of the brief, but at the same time without the very strict spatial configuration of the Masterplan. We feed the functions into the algorithm, with the understanding that the urban form will follow the Chinese regulation of facing south to maximise solar exposure, but at the same time, we introduce the social condenser, a constructivist concept of overlaying functions rather than keeping them separate.

Figure 7: steps of the algorithm

In terms of energy: one bitcoin transaction now uses as much energy as your house uses in a week. We propose that the city has BigData data-centres, and bitcoin/blockchain computation centers dispersed all around the city in an effort to create an urban environment that integrates computer networks, energy production and consumption, heating, and functional diversity. The city that our algorithm creates is one of pure programme, pure density, pure organization and no form. In a world where one can have any form that he/she likes, it is within the interconnections, the network and the energy that the power of architecture lies. We create a new manner in which to create grids, a network of cities and an interplay of functions. As such we envision that our algorithm creates the masterplan framework of the future where architects will operate in true 3d cities, with very restricted reference to the ground. 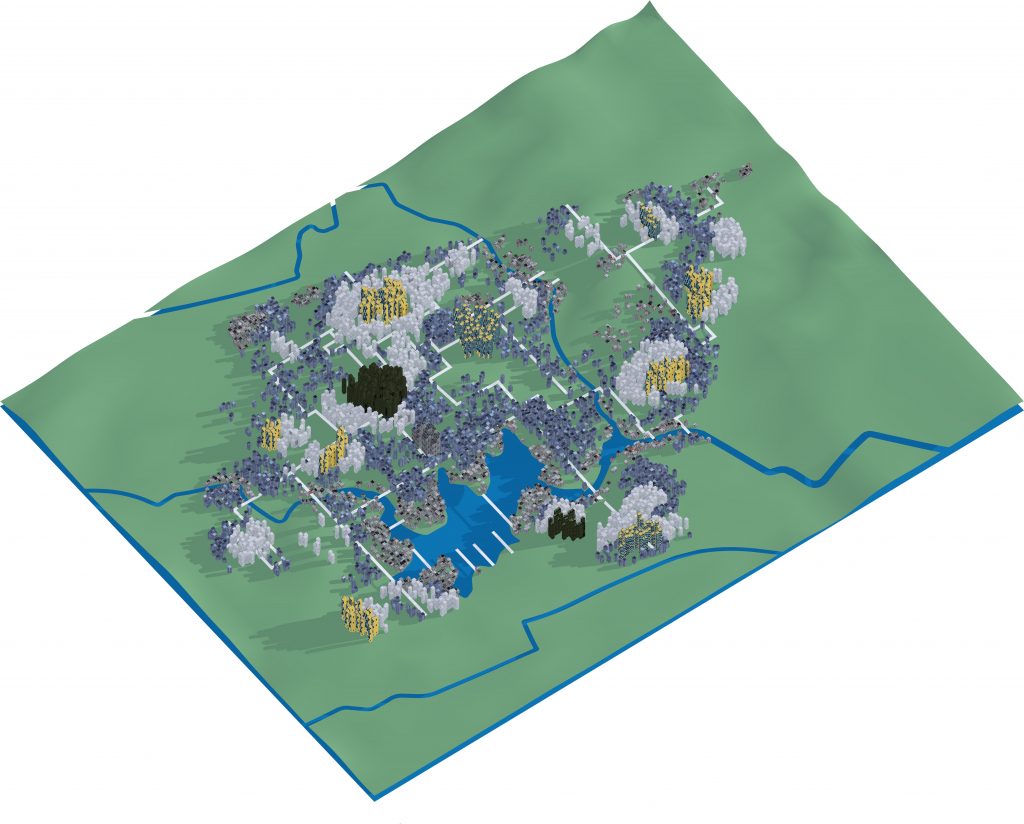 Figure 9: Axonometric of the submitted solution.